Behind the neck press, right or wrong?

The shoulder press behind the neck press is an exercise that has been used in the gym since the early years of bodybuilding. However, in recent years there has been a trend around this exercise in which it is claimed that it should be avoided because it is bad for the shoulders and has a very high risk of injury. Often we hear this without people having really done any research on why the statement is made. To clear this up once and for all, we at Fysiofitaal are going to put the facts in order for you.

Behind the neck press vs. Military press

We start with comparing the military press and behind the neck press. Where exactly are the similarities and maybe even more important, the differences? As every strength athlete knows, both exercises are meant to train the shoulders. Because we think the term shoulders is a bit too general, we will tell you that the shoulder is basically composed of the deltoid, which in turn is composed of three parts, each with its own function, and below that the rotator cuff (shoulder cuff) with muscles that provide stability to the shoulder and the corresponding scapula. The critical reader will say that there are even more muscles with a function in the shoulder. That is true, but we find them less relevant for this article and therefore we have chosen not to mention them.

Despite the fact that both variants of the shoulder exercise are meant to train the shoulder muscles, there are also differences. In order to have a good look at the differences in movement patterns, we have taken a study from the Journal of Sport and Health Science. In this study, 33 participants were tested and the differences in movement between the two press variants were examined, but also the differences in maximum strength (1RM between the exercises). This research brought the insight that both variants of a shoulder press movement are completely safe to perform, provided that the passive range of motion (ROM) is sufficient and there is sufficient trunk stability. In addition, the researchers saw that the 1RM is almost the same in both variants. 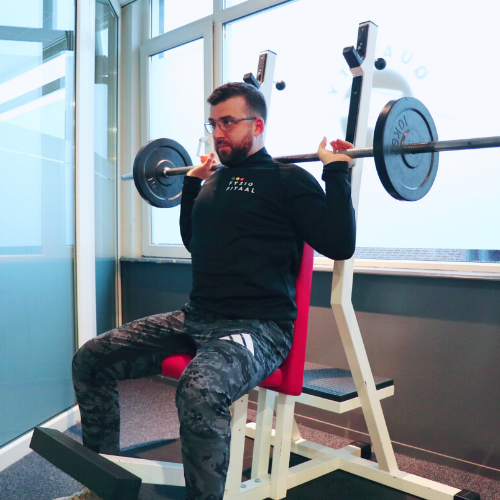 What does this mean in practice?

In practice, this means that when men want to perform the Behind-the-Heel Press, they must first pay attention to increasing the ROM. This is because (especially trained men) in the exorotation movement (turning the shoulder to the outside) often have less movement possibilities than women. The question you should ask yourself is whether you really want to do that or whether you would rather perform the press from the chest side. Since the maximum strength makes no difference between the military press and the behind-the-neck press. Furthermore, the researchers indicate that especially women should first pay attention to improving the trunk stability, because women had more movement in the spinal column during the exercise.

In short, it comes down to the fact that it does not really matter which variation of the shoulder exercise you do in your training, as long as you make sure that the other factors are in order. In principle, everyone can do the military press without any problems. The behind-the-neck press is more difficult for some. Stick to what you feel comfortable with and make sure you have a good technique with the corresponding parameters (speed, ROM, etc.).