Almost everyone has broken their ankle at some point. In most cases, the ankle tilts inwards. This movement of the ankle is called inversion. That is why it is called an inversion trauma. The symptoms are mainly on the outside of the ankle, where the ankle ligaments are. These can be stretched or even torn. The ankle is often swollen and it is often difficult to walk. In this article, we will explain what an ankle sprain is and how you can best treat it.

How do injuries to the (outside of the) ankle occur?

An ankle sprain is relatively common in the Netherlands. On average, there are 680,000 cases of a similar ankle injury every year. Most injuries occur when the foot falls off the ground incorrectly during a jump or a fall. In this case, the ankle cannot absorb all of the body weight and collapses inwards. Sports in which you have to change direction quickly are by far the most susceptible to this type of injury. Examples of this are:

The ankle consists of 3 pieces of bone which make up the ankle joint. These are the tibia, fibula and talus. The joint is also formed by muscles, ligaments, tendons and a connective tissue membrane called the syndesmosis (more on this later). Muscles such as the calf muscles, tibialis anterior, tibialis posterior and the peronal group are responsible for the active stability of the ankle. Passive stability is provided by ankle ligaments. These are found particularly on the outside, but also on the inside of the ankle. The following ligaments are found on the outside:

Sounds very complicated but actually it is not. In anatomy we work with Latin names. Latin is no longer a spoken language and is mainly used in writing. Latin is mainly used by scientists to clarify terms and concepts. Thus a physiotherapist in the Netherlands knows what a doctor in India means by a certain injury or body region. The English language has largely adopted this, but originally it was done through the Latin language. That is why anatomical concepts are still referred to in Latin.

Literally translated, anterior talofibular ligament is the front ligament located between the talus and the fibula. Easy as that!

These ankle straps are originally quite sturdy but they do show some degree of stretching. When, for example, you stumble in a sport and the ankle falls inwards, these ligaments stretch. In the event of a serious sprain, these ligaments can be stretched or even torn. Within physiotherapy, we work with three gradations: 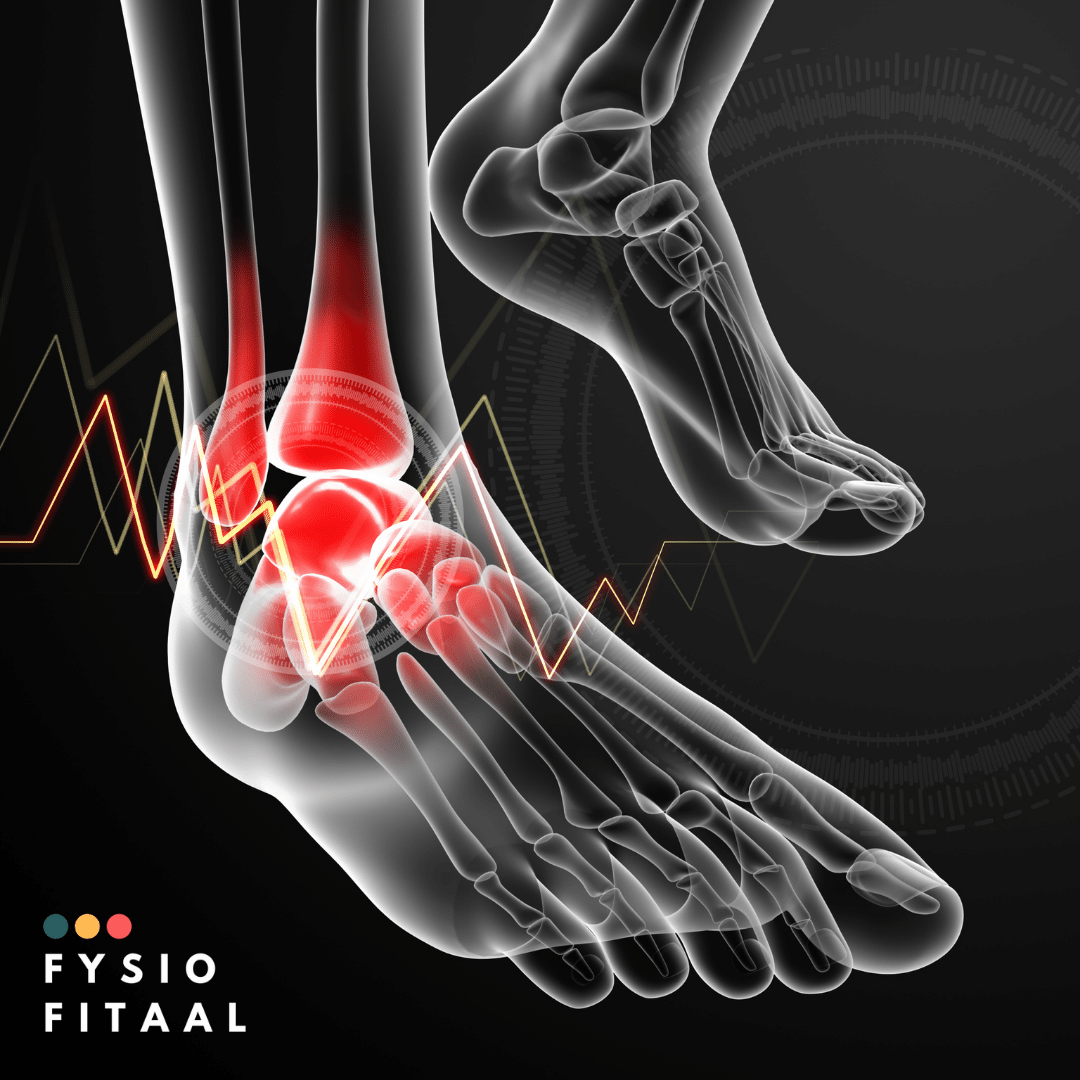 What are the symptoms of an ankle sprain?

If you have just twisted your ankle, swelling can occur relatively quickly. This is particularly the case on the outside of the ankle, but if the injury is severe enough, the whole ankle will appear swollen. Over time, discolouration may even appear. This is because the ankle ligaments also have blood vessels. Movement can be painful, particularly in the direction of inversion (inwards). Sometimes, it is difficult to fully support the affected ankle. Crutches are then an option to get you through the first few days. After that, it is advisable to start loading again and to return to a normal walking pattern as soon as possible. If the injury is so severe that you cannot take any support at all or can walk less than four steps, you may have a broken bone. In order to make a decision about this, we in physiotherapy use a decision tree. We call this decision tree the Ottawa ankle rules. When you meet one or more criteria within 7 days after the accident, the chance of a bone fracture is present. This does not mean that it is a fracture, but an X-ray is in order. The Ottawa ankle rules consist of the following criteria:

The syndesmosis runs between the tibia and fibula. This is a rigid structure that connects these two bone parts. Approximately 11-18% of inversion traumas involve a syndesmosis injury.

The injury is often present in combination with other damage to structures. Bone fractures are also included. We often see syndesmosis injury in combination with a high fracture of the calf bone. We call this a Mainsonneuve fracture. The recovery time for a syndesmosis rupture is twice as long as for ankle ligament injuries alone. It is often difficult to pick out a syndesmosis injury on physical examination. 40% of the people who have broken their ankle complain about recognisable pain in the area of the syndesmosis (interosseous ligament). There is often irritation or damage to the front part of the capsule of the ankle which resembles these complaints. Again, in a very small group (11-18%) there is real damage to the syndesmosis.

The following symptoms are often seen in syndesmosis injuries:

If you really want to know whether there is a syndesmosis injury, an MRI will often give you a definitive answer. However, this is not done just like that. But when there is a high degree of instability together with recognizable pain during the physical examination, an MRI can be considered. 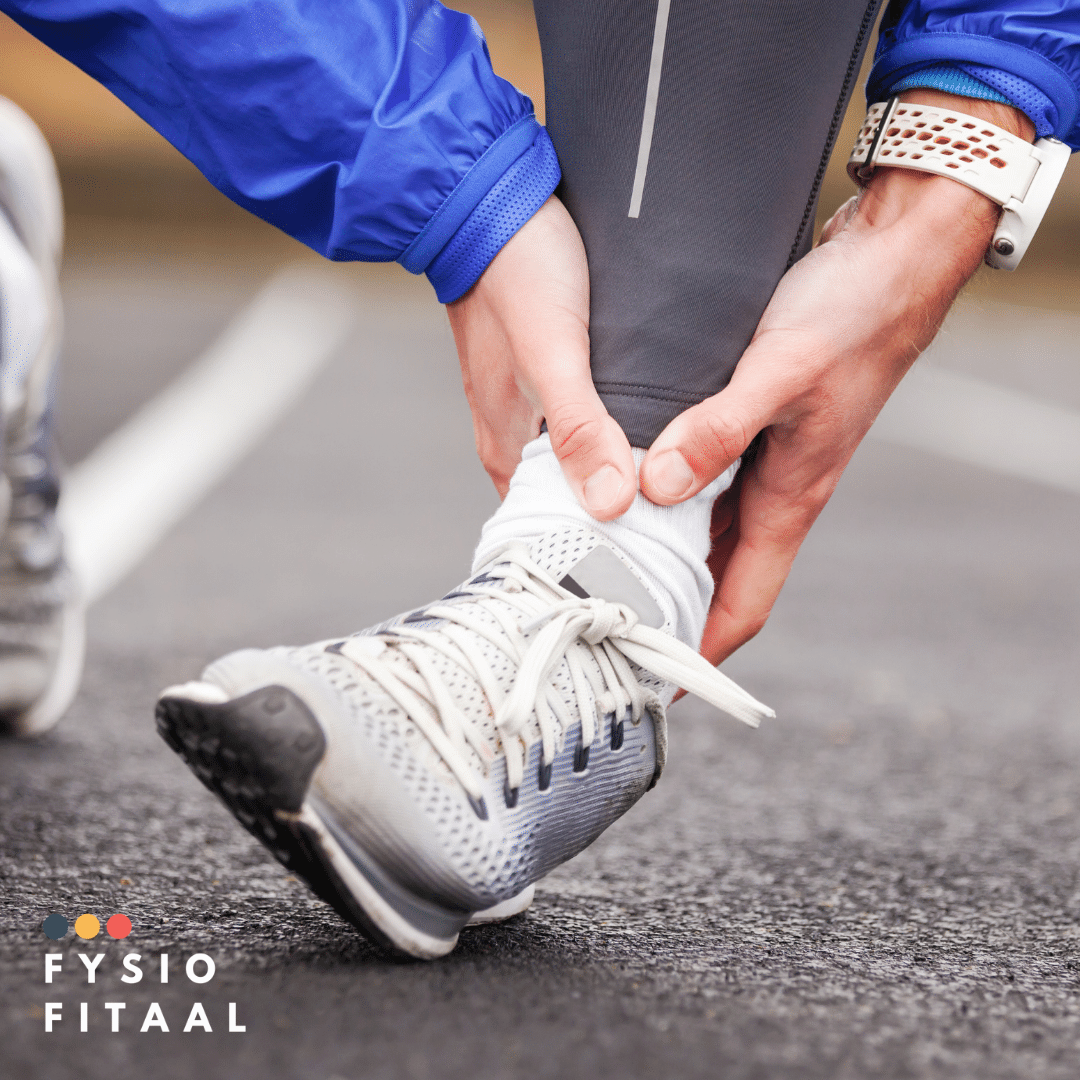 Rupture and luxation of the peroneal tendon

Pain on the outside of the ankle can also be caused by a tear of one of the peroneal tendons. The peroneal nerve is a small calf muscle which runs on the outside of your calf bone. The plural of peroneal nerve is peroneii. The sheath through which this tendon runs is severely irritated and painful. Stretching the muscle is painful along with pressure pain. Sometimes people hear a clear snap at the moment of origin.

What can we do for you and how long will recovery take?

During the intake we will first gather all information about, for example, the moment of onset of the symptoms, the nature of the pain and the limitations you may experience during the day. After that, the process will be focused on excluding a fracture. This can be done by means of the Ottawa Ankle Rules (OAR). These are guidelines to determine whether there is an indication for an X-ray. If the OAR are positive, in combination with the moment of occurrence, it is first recommended to have an X-ray taken. This is always done by the doctor. Further treatment depends on the diagnosis made. Tests such as the anterior drawer/ exorotation stress test and squeeze test are performed. By means of these tests, the different types of ankle injuries can be distinguished.

Fracture: If there is a fracture you will first be treated by means of a plaster cast. After the bone has healed sufficiently you can visit Fysio Fitaal. The therapy will be aimed at improving the strength, movement and active stability of the ankle.

Tyres: Damage to the ankle ligaments can be classified from grade 1 - 3.

With a grade 1 injury, the treatment will consist of conservative therapy. Progression will be made on the basis of pain. The ankle often fully recovers within 0-3 weeks.

With a grade 2 injury, the ankle must be spared for a longer period of time. In this case, conservative therapy will also be chosen in the first instance. Recovery usually takes place between weeks 6 and 12 after the injury.

In grade 3, a ligamentous reconstruction (surgical repair) is considered. This is usually the case with young/professional athletes. Chronic instability, which means that your ankle tends to hurt very often, can also be a reason for surgical intervention. We then help you further by means of physiotherapy. The treatment consists of restoring mobility, strength and, in the long term, explosiveness.